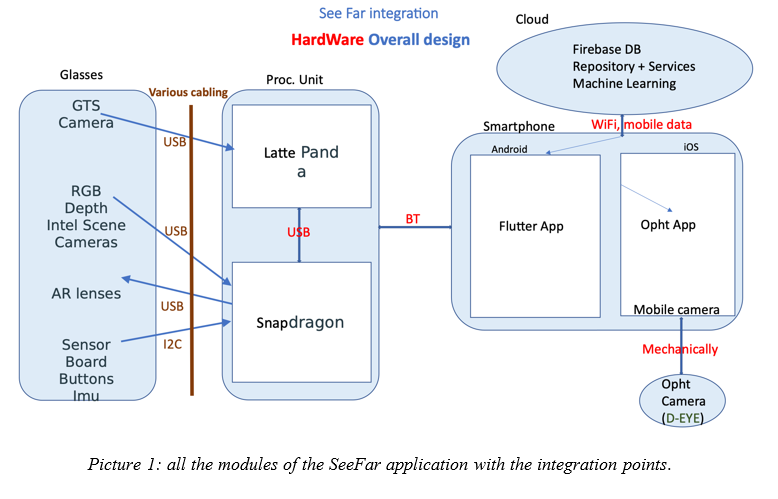 The SeeFar application consists of various heterogeneous modules, such as smart glasses, various sensors, processing units, smartphone applications etc. So, the integration of all these modules was a challenge during the project.

For all possible integration strategies (“big bang”, “with the Stream”, incremental, Aggregates, Subsets, Threads or “Functional Chains”, top-down, bottom-up, sandwich or hybrid, Criterion Driven or “Critical Modules”, Continuous) for the SeeFar having considered the various advantages and disadvantages of the Integration Strategies the particularities/specificities and main features of the See Far solution’s comprising ‘aggregates’ and overall architecture, it has been decided that the most appropriate Integration Strategy for the See Far solution was the Aggregates’ Integration (also referred to as “Subsets”, “Threads” or “Functional Chains” Integration).

In this approach, the implemented elements/components are assembled into “aggregates”/“subsets” (or per execution “thread”), and then the aggregates/subsets are in turn assembled together. Is also referred to as “Functional Chains Integration”. Characteristic aspects are:

The predominant reasons why the Aggregates’ Integration approach was selected for the See Far solution are summarised in the following points: