The socio-economic analysis and the validation of the See Far solution include macroeconomic variables relevant to the EU context such as healthcare costs, welfare system costs, employment rate and competitiveness of the developed platform and gross domestic product (GDP).
The analysis demonstrates how vision impairment can impact the direct cost to the health sector and the indirect costs of the loss of productivity in the workplace. Consequences such as impaired function leading to loss of confidence in carrying out everyday activities, and loss of independence and autonomy can be severe and even fatal in some instances.

We have done a qualitative and quantitative evaluation of total assessment generated in work age population and the gain of saving resources, better organization for safety workplace, quality of life, more inclusive society, sectors developed by the implementation of the See Far innovative healthcare technology and service in the healthcare system.

Worldwide in 2020, approximately more than 590 million people have distance vision impairment, 43.3 million people are blind and 2295.1 million with MSVI within.

The loss of sight represents public health and social and economic issues for society. An increasing number of impaired vision individuals have caused a significantly increasing demand on the healthcare system in terms of resources. In addition, visual impairments impact those affected by their employment situation. People with lower levels of self-reported general eyesight were significantly less satisfied with their jobs, had less freedom to decide, and had an inadequate salary, leading to seeking early retirement[1].

The analysis estimates the potential economic impact of using See Far to support the ageing workforce with vision loss, an age-related condition, to remain actively involved in their professional and personal lives. The author considers the perspective of employers and employees older than 40 years and less than 64 years. The authors focus on two sources of monetary benefit deriving from increasing productivity of blindness and vision impairment workers and their informal caregivers. The authors believe that avoiding the number of absence episodes at work for people with eye issues goes in hand with decreasing the time devoted by informal caregivers to them. In other words, the informal caregivers could use this opportunistic saving time to produce an equal income gain. 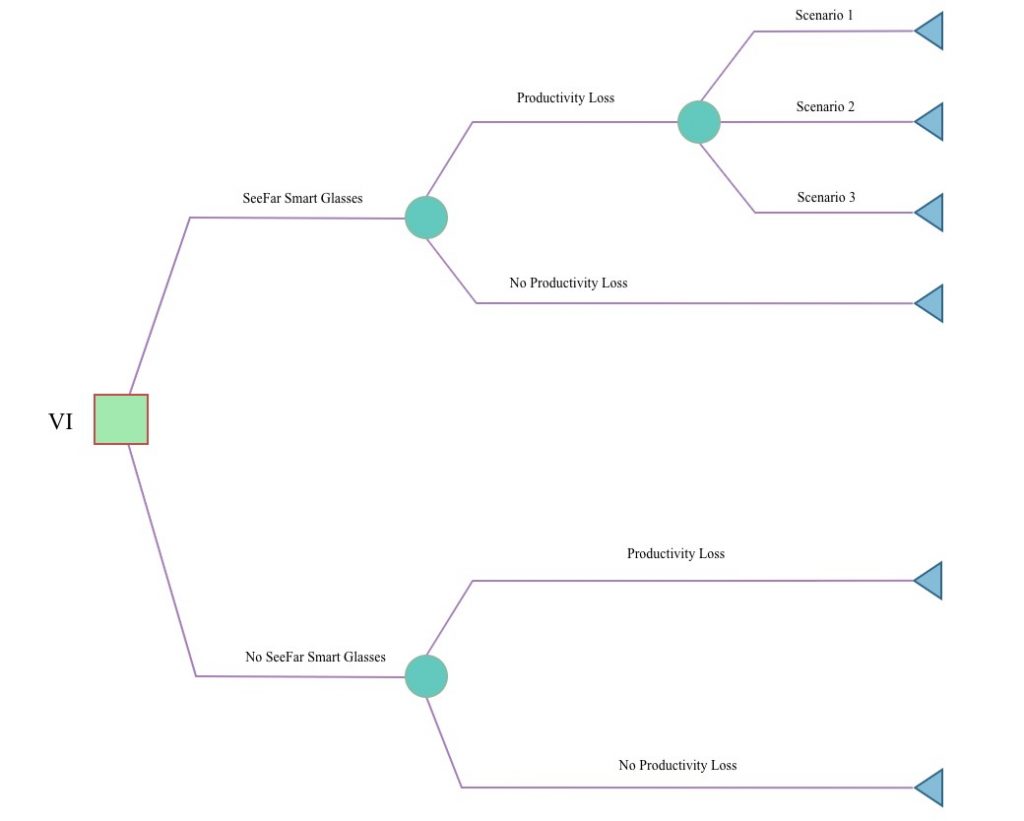 The three scenarios have been made as following:

The first hypothesis is that the See Far smart glasses have a marginal impact on the probability of diagnosing and improving the living and working quality/condition/productivity by 20%. The following scenarios gradually worsen the probability of diagnosing diseases by 5%. The authors suppose that the probability of detecting disease at an earlier stage and customising visual assistant happen at the same probability. We assume that the increasing independence level of users goes aligns with the decrease in informal care from their spouses and relatives providing. Consequently, the informal caregiver could use this time to produce an increase in productivity. Therefore, scenario 2 projects an increase of 15% productivity of the user as well as their informal caregivers and 10% for scenario 3.

The study summarizes also the potential economic impact of See Far smart glasses based on its design in Spain and Denmark. We compare the base case – the current modified working situation where employees were off work schedule or off work to visit medical treatment/screening in person or reassigned to another position. The See Far smart glasses play a role as a mobile phone-based screening program. We hypothesize that our scenario case where the employees using the See Far smart glasses would improve their productivity at work due to increasing quality of life, reducing absenteeism and presenteeism, avoidable time to visit a clinic, and mobility time. Better vision levels and dependence levels have been proven to reduce the burden on informal caregivers. The potential economic benefits from the See Far-FAR product should be understood as the net monetary cost saving from the base case.

Sensitivity analysis in different parameters provides different positive economic impact returns of the See Far smart glasses and mobile applications to visually impaired individuals in our hypothesis. We suggest some further investigation to fully understand the smart glasses’ impact on one’s health, and economic impact on the health care system.